Upon arrival in Mobile, I began to refer to the city as a quieter, gentler, New Orleans. The weather is the same, the buildings are a similar mix of Creole-style architecture, and Mobile even has a Mardi Gras… the oldest in the United States. Locals are quick to point out that their Mardi Gras is older than the city of New Orleans.

But, Mobile does not have the same frantic, mad, crazy, touristy feeling that New Orleans does. Mobile is mellow, people are super friendly, and it’s a genuine Southern experience. 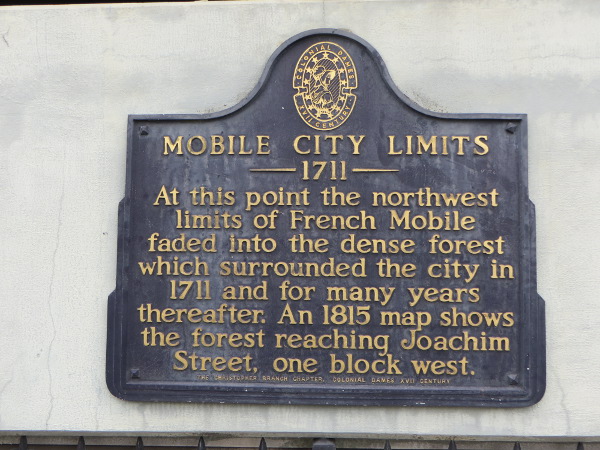 Mobile was founded in 1702 as a French colony by Jean-Baptiste Le Moyne, Sieur de Bienville. None of the French displaced by Le Grand Dérangement ended up in what was then known as La Louisiane but migrations that happened after the expulsion pushed setters to the Southern U.S. and to Mobile.

The arrival of male French settlers in Mobile came with a common settlement problem: a lack of women. And, how can you build a colony without women? Bienville took it upon himself to petition Louis XIV for wives. The women sent (from Québec to Biloxi) were the so-called fille à la cassette or casquette/casket girls, named so for the bags they carried that contained their belongings. 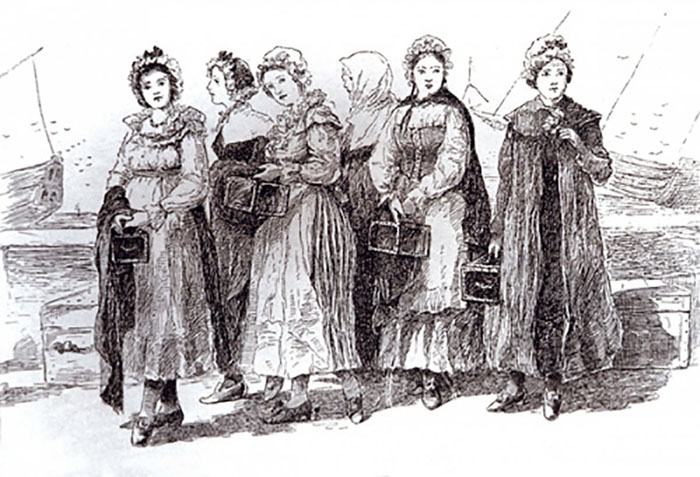 There were virtuous, hardworking girls taken from orphanages in Québec to be given to settlers in both Biloxi and Mobile as wives. A seemingly new twist on the “free land for settlement” incentive. The girls lived in Bienville’s house until they were married off.

The first recorded settler/casquette marriage baby was born in 1705 and it’s considered an honour to be able to say you are a descendent of any one of these girls. The next round of females to arrive in Louisiane weren’t so virtuous (most were prostitutes and/or criminals) and adding these women to an already licentious city was like adding fuel to a fire.

History has been both kind and cruel to Antoine de la Mothe Cadillac. On one hand, he is depicted as the adventurous, intelligent businessman and explorer who founded Detroit in 1701. One of the first car brands produced by Ford, the Cadillac, was named after him.

On the other hand, Cadillac was a French mercenary soldier who participated in the illicit alcohol and fur trade; his identity was largely fabricated and instead of being a hero of France, it’s thought that he was a convicted criminal named Antoine Laumet who tried to recreate himself on a new continent. There’s still debate about this detail. Some historians argue that the two men are completely different people.

As Cadillac, he’s accused of perpetuating the trade of alcohol to indigenous people in North America… even when he had strict orders not to. His time in Mobile is marked by poverty, stagnant growth, debauchery, and blatant disrespect for French colonial rules. That’s why it was such a surprise to see Cadillac called out in a plaque in Mobile. And, the house where he lived while in Mobile wasn’t even his own, he appropriated an empty house from Bienville’s brother Antoine Le Moyne, Sieur de Châteauguay.

After the Great Fire at Fort Pontchartrain du Détroit in 1703, Cadillac moved around for several years before finally settling to Mobile in 1713. Then it was known as Fort Louis de La Louisiane and he was considered the absentee governor of Louisiane; he was given the position after Bienville was demoted.

Cadillac’s wife, Marie-Thérèse Guyon dit Després, was the influencer of the family. Her origins are confusing if you look at English websites. In some sources, she was born in Québec and lived in Nova Scotia. For others, she was Acadian and was born in Nova Scotia and lived in Québec. The internets throw out a whole glut of places where she lived in her early life: France, Maine, Nova Scotia, Montreal… etc. These all contradict each other.

The person most widely credited for early French Canadian genealogy is Cyprien Tanguay, a historian and priest from Québec who dedicated his entire life to creating the Dictionnaire généalogique des Familles Canadiennes depuis la fondation de la colonie jusqu’à nos jours. Rather than write all this as a source, people just refer to it as Tanguay. So, in essence, he is the source… and not the volumes of genealogical data.

According to Tanguay, the Guyon family were residents of la basse ville, Québec, this is the lower part of Québec City (Québec, Capitale-Nationale, Québec), which I wrote about in August.

Denis Guyon was an early settler and a fermier (farmer) who hired domestique engagé (domestic workers) to help with the house and farm. Guyon had nine children, of which only three made it to adulthood. Marie-Thérèse Guyon dit Després was one of these children (1671).

In August 1685, two ships, La Dilligente et Le Fourgon, entered Québec’s harbour and brought with them dead crewmen and a deadly maladie contagieuse (contagious disease). Both Denis and his wife died after contracting whatever disease was brought to Québec on these two ships. – Genealogie Quebec

This left Marie-Thérèse a 14-year old orphan and it was up to her two surviving brothers, Jacques (22-years old) and François (19-years old), to take care of her. Two years later in 1687 she was married to Antoine de Lamothe de Cadillac, a friend of her uncle François Guyon de Dubuisson, a French privateer who mentored Antoine and introduced him to colonial society.

It was Marie-Thérèse’s familial connections that brought Cadillac to both Detroit and Mobile. She comes from a family of well connected French explorers, interpreters, and guides. Her first cousin was François Guyon dit Després, the explorer who mapped the Mississippi and Missouri Rivers. He was already in Mobile when the couple arrived. And, her grandfather was Nicolas Marsolet de Saint-Aignan, a friend of Samuel de Champlain and a part of the original group of explorers who helped found and settle Québec.

She played multiple roles at both settlements. Her husband granted her power of attorney so she could sign documents in his absence, which was frequent. In Detroit, she was the Fort’s doctor, administrator, and a shrewd businesswoman. She didn’t shy away from the day to day details of financing, transactions, and trade and in a way, the French forts were built on her back while her husband was off exploring.

When the couple were forced to leave Detroit, they were sent back to Quebec and recommissioned to Louisiane, which was a commission that Cadillac did not want. The colony already had a bad reputation and was struggling by the time they arrived. On their journey South in 1713, they escorted a group of 25 casquette/casket girls to Mobile… the non-virtuous variety mentioned above.

By this time, the couple’s oldest daughter, Marie-Madeleine De Lamothe-Cadillac, was marrying age and according to some, was a romantic interest for Jean-Baptiste Le Moyne de Bienville. Because of this (and probably a few unwritten/unspoken truths), the relationship between Cadillac and Bienville soured. The former continually petitioned the French King for reassignment until his request was granted 3-years later. This is when Cadillac and his family headed back to France.

After this, the entire family disappeared into the mists of time.