Before New York was packed with people… before it was a global destination for fashion, music, and business… before it was home to the Mets, the Rangers, and the Yankees… before it was the place that Loyalists hid during the American Revolution before Ellis Island became the point of entry for millions of immigrants who entered the United States… it was Dutch and it was called Nieuw-Amsterdam.

New York is a Dutch colony settled by the Dutch East India Company. As such, unlike the rest of the early colonies, which were settled by people escaping religious persecution, New Amsterdam was founded in 1624 for economic reasons. Because of this, the city has always been driven by capitalistic ventures, it has always been a multi-cultural patchwork of people working together, and it has never been a city shaped by persecution or doctrine based policy.

What’s in a name?

The transfer of New York from the Dutch to the English reflects the city’s capitalistic roots and an overall lack of a unified cultural sentiment… as is seen in the Fall of New Amsterdam by Jean Leon Gerome Ferris. The painting depicts Peter Stuyvesant and the people of New Amsterdam deciding whether or not to fire on English ships as they enter the harbour. 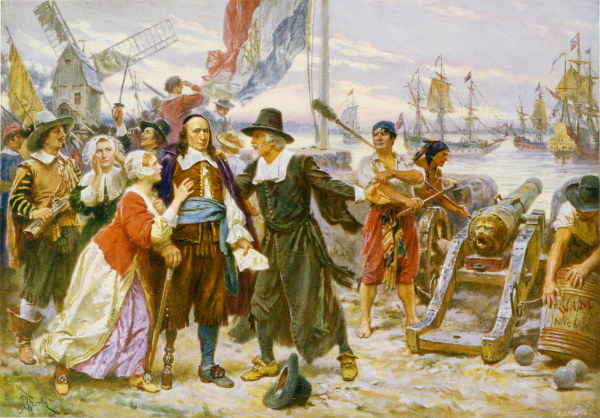 They quickly decided to welcome the ships because the English brought business and money to the city. Without a shot being fired, it was on this day that Manhattan became English (1665) and subsequently renamed New York.

I walked these streets every day for months. It’s hard to see the historical remnants behind the human hustle & bustle, traffic, cement, construction scaffolding, noise, and trash littered streets.

The buildings that physically remain from the Dutch 1600s are either in Brooklyn (Breuckelen) or on Staten Island (Staaten Eylandt). However, the names of streets still reflect the early Dutch origins: Wall Street (de Walstraat), Pearl Street (Parelstraat… named after the oysters found in the area), Bleecker St. (Blekers), Harlem (Haarlem) and Broadway (Brede weg)… to name a few.

However, nothing remains of the 17th-century Dutch buildings in the original Seaport or Financial districts; probably because most of these buildings were destroyed during the American Revolution, the Great Fire of New York (1776), or during the New York Conspiracy of 1741. Waterways like the Broad Canal (now Broad Street) were filled in with fruit and vegetable garbage and then later paved.

Lots of cities have a bricked, cobblestoned, warehouse district. New York is no exception and it’s carefully crafted historical high-end tourist district is the South Street Seaport area. This is a part of New York that is frequently damaged by life-changing events and then rebuilt.

The highlights of this area are a handful of permanently docked ships in the harbour, the renovated Schermerhorn Row building (featuring galleries and restaurants), and wandering the old seaside mercantile market buildings.

0 comments on “That place called New Amsterdam”Add yours →