Let’s break this down.

When the Spanish arrived, Colombia was rich with culture and different tribes (from this post). But rather than conform to subjugation, these Aboriginal groups simply disappeared into the mountains and were so organized militarily that the conquistadores feared them and retreated.

This left the Spaniards with a dilemma. Colombia was rich in gold and they needed people to do the hard work of finding and processing metals so they could send it back to Spain to fund wars in Europe; but, they couldn’t steal or process stolen gold without enslaved aboriginal people. So, they imported slave labour from Africa to do the work (see this post).

But, bringing all these people together created a mishmash of different beliefs, religions, and practices to the Caribbean.

To control all these cultures, the Spanish brought Ferdinand & Isabella’s Inquisition to the new world and used Cartagena as the main city for punishment. People who were accused of a crime anywhere in the colonies (including crypto-Jews who were in South America to escape antisemitism in Europe) were brought here for sentencing and punishment.

The hub for all this was the Palacio de la Inquisición.

When you walk into the museum there is a video playing the story of Paula de Eguiluz, who was a healer from Cuba accused of performing incest and black magic. She was sent to Cartagena for trial, punishment, and was sentenced to a public lashing plus community service.

After being released in Colombia, she became a part of a “love magic” movement and was known for her knowledge of love/sex spells. She was approached by Ana de la Fuente, the wife of Don Francisco de la Guerra, and asked to create a potion that would stop her husband from cheating.

The potion did not work and the wife accused the healer of practicing black magic. Paula was imprisoned and eventually disappeared and was never heard from again. 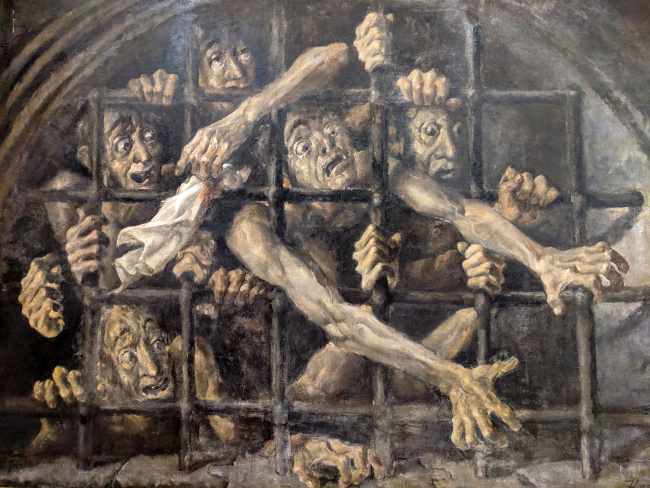 The museum has made a conscious choice to not focus on the instruments of violence from the inquisition. You’ll still find a small sampling of torture devices but most have been removed.

Instead, what you’ll find is a tremendous amount of folk art from around the Caribbean that depicts the scars and cultural gaps left by the slave trade, subjugation, and inquisition.

0 comments on “The Inquisition in Cartagena”Add yours →