It looks rather odd sitting in the middle of flat prairie… out of place like it fell from the sky or was moved from the mountains by a giant hand. The “it” I am referring to is the Okotoks Erratic, a sight commonly known to locals as the Big Rock (Big Rock Breweries namesake). It’s not alone; it’s one of the many erratics that make up the Foothills Erratics Train.

An erratic is a rock or boulder that differs from the surrounding rock — this particular glacial erratic is thought by scientists to have surfed on the back of an iceberg from Jasper National Park during the last ice age.

The Blackfoot people have known about the rock for centuries. The name for the surrounding area (including town) comes from the Blackfoot word “ohkotok,” which means “rock.” It even appears in spoken histories and Blackfoot lore. The photo below reminds me of the story of Napi and the Rock; I see a face looking longingly at the Rocky Mountains: 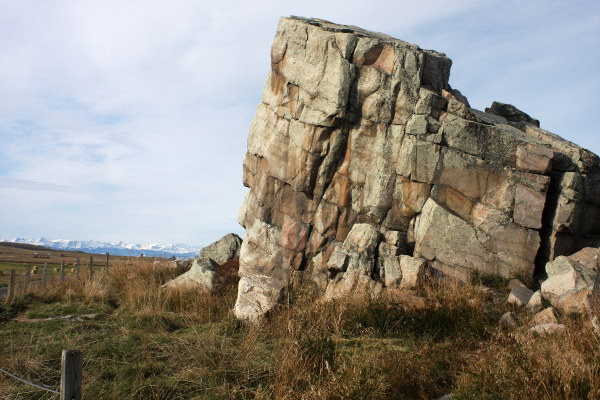 One hot summer day, Napi — the supernatural Trickster of the Blackfoot — sat upon the Rock to rest. Because it was so hot, Napi threw his robe over the Rock saying “Here, I give you my robe, because you are poor and have let me rest on you. Keep it always.” Napi walked on, and it began to rain. Napi went to the Rock and asked it to lend him the robe, but the Rock refused. Napu got angry and took “his” robe. As he walked away, he heard a loud noise — the Rock was chasing him!”

Napi was scared and ran. His friends — the buffalo, the deer, and the antelope — tried to stop the Rock but were crushed. Nearly exhausted, Napi called upon some bats for help. The bats dove at the Rock and one hits it in the middle and split it in two.

This Blackfoot legend reveals not only how the Rock was split but also why bats had “squashed” faces. There is also a moral: “Don’t take back what you’re given!”

Located on Highway 7 between Okotoks and Black Diamond, the Erratic can be found on the right-hand side of the road. There is parking and washrooms. It used to be a frequent destination for people new to bouldering, however, now people are asked to stay off.

Kid Rating: 3 out of 5 because I enjoyed listening to the rock story over and over again. At one point I thought the rock was chasing us! I’m sad we couldn’t climb and explore the rock like we could at the Hoodoos.

Adult Rating: 2 out of 5 because it was an interesting and short trip. We enjoyed the Blackfoot Lore and reading about the importance that the rock played in their migration. Avoid the bathrooms if you can (extremely disgusting). It was disappointing to see all the garbage and dog poop left behind by other visitors.

8 comments on “Okotoks Erratic”Add yours →