This is the second post in a series about a group of World War 1 soldiers from Mill Village, Nova Scotia who all enlisted for the 209th Battalion in Swift Current, Saskatchewan. For full context and more information about the people below, Part 1 is here. There is also a remembrance page with links to all the posts in this series, which can be found here.

The start of the First World War presented an interesting juxtaposition for farmers in Saskatchewan. On one hand (as is evident in attestation records), many of the farmers and their families came from England and mainland Europe; many still had deep roots in the old world.

On the other hand, the arrival of the war meant losing the main source of farm labour: young men… just as international demand for wheat increased because of the war. As such, during the early years, farmers were exempt from enlistment and the recruitment trains kept their distance.

However, as the number of recruits dwindled, the Canadian government looked to other sources for their disposable bodies. It’s hard for me to not feel angry when thinking about this. In 1916, recruitment trains swept into rural towns, they bullied and pressured residents into giving up their youth without explaining the deadly outcome, and they took all these young men away to die… often within days of seeing their first battle. For example, the 46th Battalion (a.k.a. The Suicide Battalion) from Moose Jaw earned a 92% casualty rate within a short period of time.

By 1916, military leaders on both sides already knew that trench warfare was not effective; both the Entente (Allies) and Central powers were in a stalemate and had been so for years. So, recruitment was meant to find the men needed to shore up the numbers in the trenches in a futile attempt to move immovable enemy lines (there is more about this in Part 6).

Creation of the 209th Battalion

In January 1916, one of Swift Current’s soldiers and prominent lawyers, Lieutenant-Colonel W.O. Smyth, was given permission by the Defense Minister to create a local battalion. The idea was to create a more loyal, effective battalion using local men who grew up together, worked together, and trained together. This was during a period when there was increased pressure to send another 20,000 troops… later changed to 35,000 troops… to Europe.

On February 3, 1916, the Canadian House of Parliament burned to the ground. At the time it was seen as a “plot by German enemies,” but the Royal Commission investigating the fire ruled out enemy involvement and even today the cause of the fire still remains a mystery. 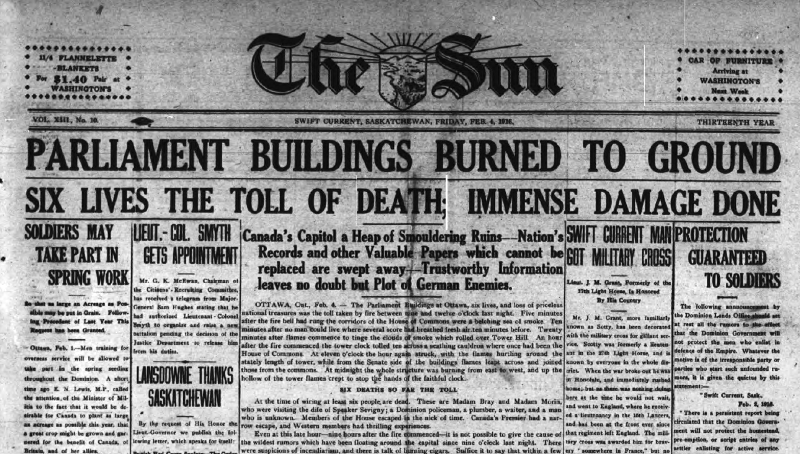 Public opinion in Saskatchewan changed immediately. On the same day as the fire, it was announced that Lieutenant-Colonel W.O. Smyth was released from his duties with the Justice Department and given control of a new Swift Current battalion. By February 11th it had a number: the 209th Battalion. 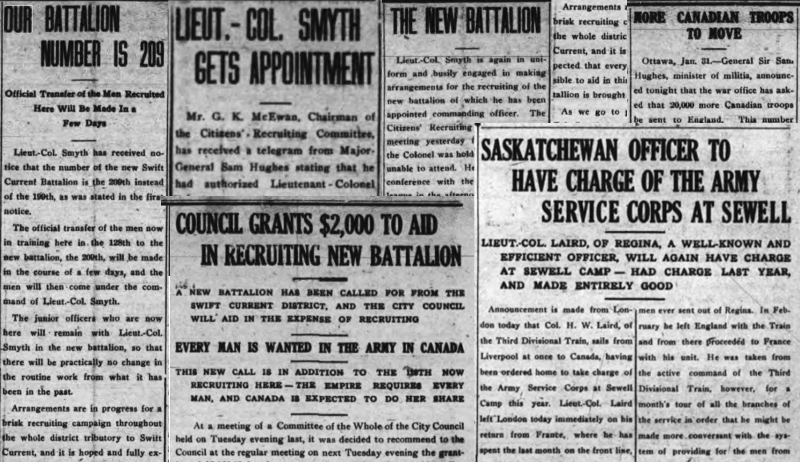 The Citizen’s Recruiting League hit rural Saskatchewan hard and like mentioned in the previous post, peer pressure was intrusive and people who avoided enlistment were outed in the local newspaper.

During a recruitment meeting in Cabri, officers called the people of Cabri un-patriotic and apathetic because they weren’t giving up their farm working sons. The boys from Mill Village attested together on March 9, 1916, as a group and joined other soldiers in Swift Current who were waiting for the Battalion to reach its full strength.

It’s known that Max and Amos were in Swift Current and in uniform on March 17, 1916 when Max mailed the below postcard to his father in Nova Scotia. They were to be a part of the 4th continent of soldiers sent from Saskatchewan and a part of the first southwest Battalion. 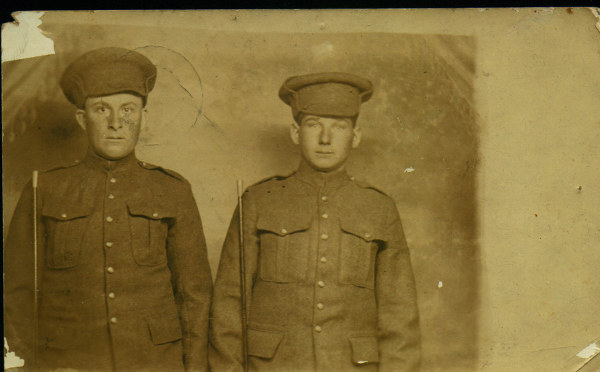 According to the military pay records of Max, Amos, Archie, and Jack, they started being paid from the exact moment of attestation on March 9th. They became a part of the 209th’s “B Coy” or the “B Company.” Archie is the only one of the group who took a “seeding leave” between May 4-7 to help his father on the farm in Battrum.

Arthur Joy attested on March 16th, 1916 so he arrived a week later; he was later mentioned in the local newspaper on May 26th after winning a wheelbarrow race during sports day. Arthur was a part of the 209th “C Company or C Coy.” 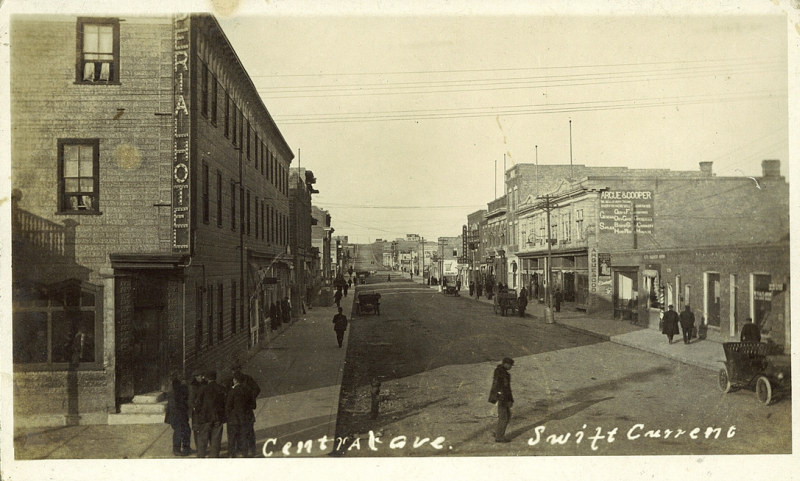 Photo from the Peel’s Prairie Provinces Collection, University of Alberta

While they waited for the battalion to reach full strength in Swift Current, soldiers stayed in the Imperial Hotel, practiced drills in the basement of the Lyric Theatre, and trained as much as they could. The city website reminisces of this time: “The soldiers would practice maneuvers at the west end park or in Ashley Park. However, while marching to Ashley Park they needed to break step over the “swinging bridge” across the creek, or the weight of their synchronized marching would cause the bridge to sway so much it looked like it would break!”

Their time in Swift Current was full of glitz and glamour. At this point, recruits likely associated going to war with being paid well, fed well, entertained, and treated like Kings. Recruits attended parties, “smokers,” and special vaudeville events.

When the battalion got its orders to head to Camp Hughes, the city threw them a going away party that included entertainment at the Princess Royal Theatre, an impressive Victoria Day “sport day,” accolades in the press, and private entertainment/concerts by society groups like the Caledonian Society, the Sons of England, the I.O.O.F., the Ladies of Success, and the Citizen’s Recruiting League.

These men were well-loved by both the Press and the people of Swift Current. 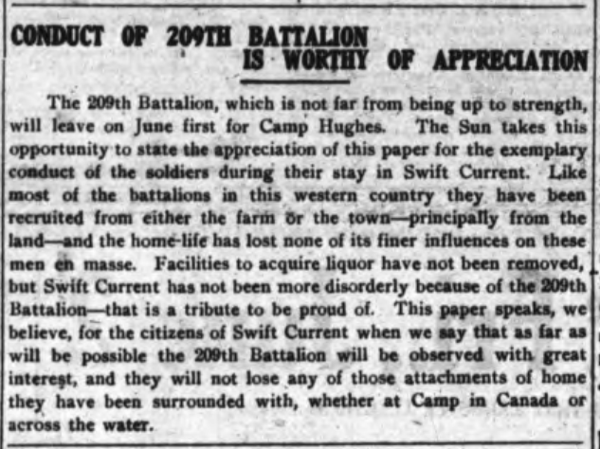 “Early yesterday morning relatives and friends gathered here to witness the departure of the soldiers for Camp Hughes. By evening not only had the Maple Creek Company and the Vanguard Company arrived, but visitors from the country had flocked in to swell the turnout of Swift Current people who gathered on the streets to view the mobilization and entertaining of the troops. In the afternoon the soldiers in Companies marched with their accoutrements to their coaches, and then returned to barracks to form up for their last parade.”

“The route of the march was south to Railway Street, and then to the depot, where a large train of coaches awaited them. There was a dense crowd of people around the railway station, and relatives and relations got as close as possible to the train to say good-bye.” — Swift Current Sun, June 2, 1916. 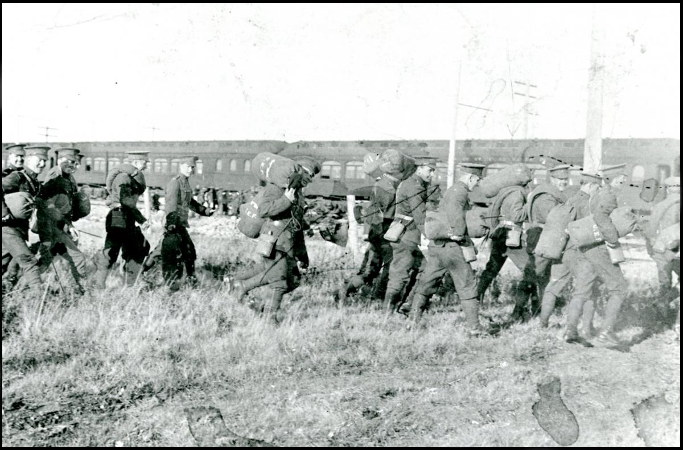 Photo from the Provincial Archives of Saskatchewan