This is the fifth post in a series about a group of World War 1 soldiers from Mill Village, Nova Scotia who all enlisted for the 209th Battalion in Swift Current, Saskatchewan. For full context and more information about the people below, Part 1 is here. There is also a remembrance page with links to all the posts in this series, which can be found here.

“We got to Halifax about 2 a.m., just as your father said, and marched to the dock just as day broke. Now we are on the transport waiting to move off; how long or short that will be I don’t know.” Thomas William Johnson

On November 1, the 209th boarded the RMS Caronia.

The Caronia officially launched on 13 July, 1904 as part of the Cunard Cruise Lines. She served as an armed support and patrol ship in the early war years, and later as a Canadian troop transport between Halifax and Liverpool; mostly bringing troops back from Europe after the war was over. 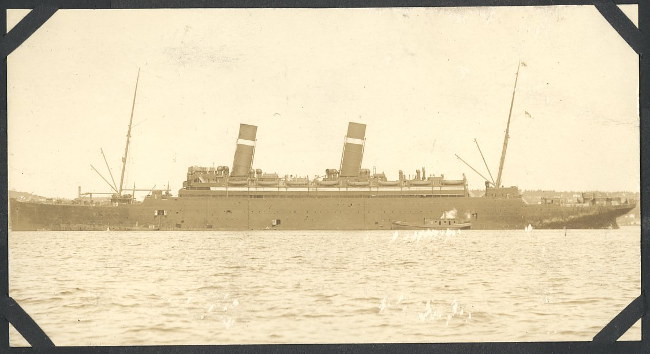 From a scrapbook kept by Caronia Chef Harry Russell; found on naval-history.net.

The crossing typically took 10-days and ran between Halifax and Liverpool. From Liverpool, the troops would board a train and head to St. Martin’s Plain, Shorncliffe, Kent.

The 209th (Swift Current), 195th (Regina), 131st (Westminster), 196th (Western Universities), and the 184th (Winnipeg) Battalions all arrived at the same time. The Caronia saw no action or reported any incidents during its November 1916 crossing. 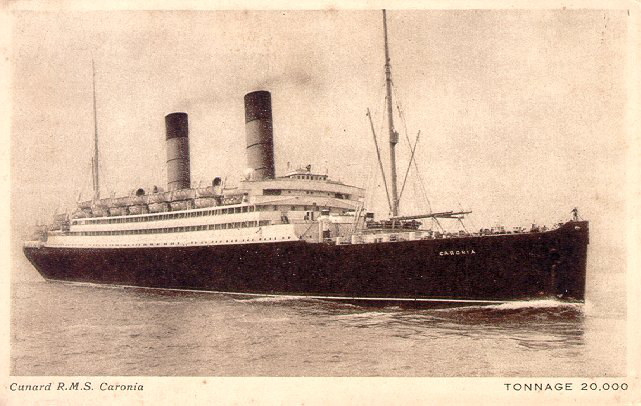 Photo from the National Archives

However, when the men boarded the Caronia in Halifax, they were angry. They were angry because the 209th hadn’t been paid since the August 15th payroll. Others had been promoted or promised a commission but did not receive acknowledgement or compensation for either.

When the soldiers went on Harvest Leave from Camp Hughes, the agreement was that they would not be paid for that period of time; and, this leave was extended until September 30th. As such, the timing of their return was between two pay periods; and, when they were called to entrain on October 9th the payroll accounts were immediately closed leaving no money to pay the troops.

The expectation was that they would be paid when they reached Nova Scotia and when this didn’t happen, they were told they’d be given one day’s pay when they boarded the ship. For those who could, they contacted the family at home and asked them to send money.

When news of this started to leak, local leadership started to worry that the men would become riotous in Nova Scotia if this issue was not resolved shortly; one member of parliament, in particular, Clarence Jameson, was so worried that he sent a letter to the Prime Minister, Sir Robert Borden. 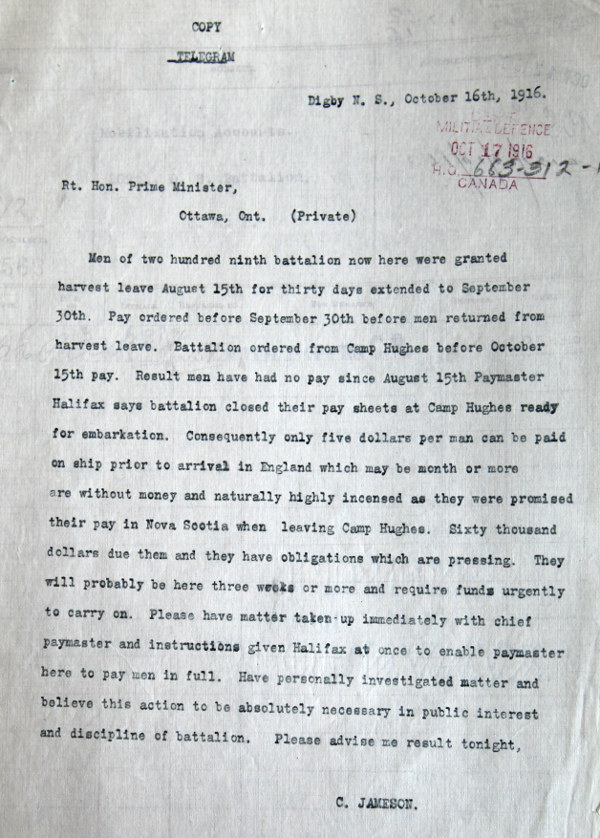 Letter from the National Archives

The Prime Minister responded immediately and instructed the Paymaster in Halifax to open an account and issue $60,000 in funds. This was a situation that parliament wanted to keep quiet and out of the newspapers. 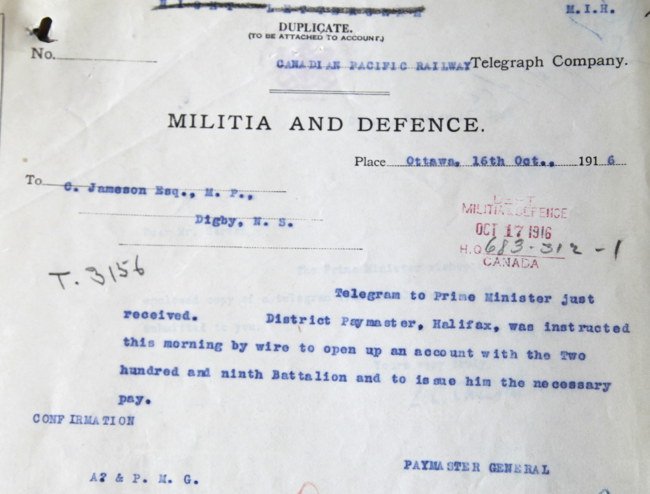 Telegram from the National Archives

With the Prime Minister’s involvement, the pay problem was quickly resolved, the funds transferred, and the men paid 100% of what they were owed.

However, by the time the men boarded the Caronia, the matter of promotions and commissions had not been resolved and wouldn’t be resolved for months after the troops had crossed the Atlantic. 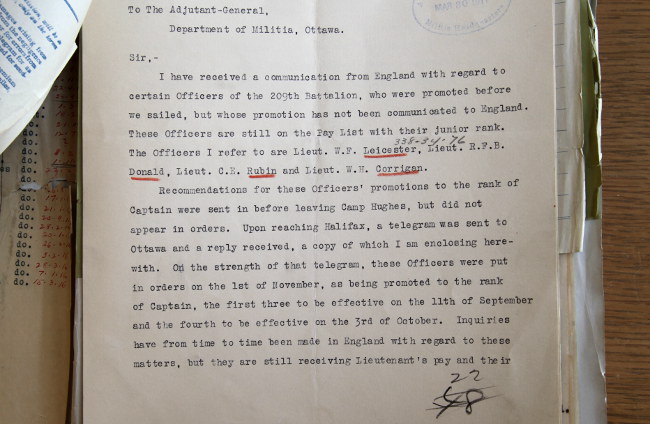 When the Caronia left Halifax, the departure Nominal Roll does not include two of our men: Arthur Joy and Jack McEachern. It’s known that Arthur was deemed unfit for duty at the Clearing Depot during the final inspection at Camp Hughes; however, why Jack is not on the roll is unknown.

But, both were still on the troopship and both men were taken on strength (TOS) to the 9th Battalion on Dec. 7th 1916. Jack appears to have needed a new jacket, drab and service trousers, khaki shirt, and puttees during an equipment inspection.

Jack is on the payroll as of November 1, 1916, so I’m assuming that he was cleared for duty aboard the Caronia (if he was ever not-cleared for duty). Why is he not on the departure roll is one question that I’ve not been able to answer.

Further, according to the Daily Orders, Arthur was taken back into the 209th on November 22, 1916, with a few other men who weren’t cleared for service at Camp Hughes… pay effective from October 10th, the day after they were deemed unfit.

We arrived at Liverpool dock on the 11th, just two weeks ago, and were paraded right to the train, a few rods from the ship, and put into the tiny little compartments of an English train. Inside of a quarter of an hour the little “whistle” sounded, and away we went.

I can hardly describe my sensation of gladness as we sped through the city of Liverpool and out of its streets, crowded with little children, out of the smoke and semi-busyness, into the sunny fields and pastures…

The men in my compartment were men from my own tent, and we had a glorious time. They had for the most part never seen England before and it was fine to listen to their wondering remarks & exclamations of surprise. The number of children astonished us most. As we passed the suburbs of Liverpool they were in crowds at all the streets as we passed, cheering and shouting and waving their arms. The women in the houses and on the streets threw kisses to us. We had a great reception in the towns in Ontario, but the people of England seemed even more enthusiastic.

We arrived at Shorncliffe in Kent about midnight of Saturday & marched in silence through the dark streets to our camp, about two miles away. There half of us were put in huts and the rest in tents; I was unfortunate enough – as it seemed – to be in a tent.

We were served a supper of fish & hot tea, & very glad we were to get it, for we had only had a sandwich since breakfast. — Thomas William Johnson, November 25th, 1916

On arrival at Shornecliffe (in Folkestone, UK), soldiers were put into quarantine for 21-days. Here they faced a new and devastating challenge: disease.

It was not uncommon for soldiers to fall victim to those childhood diseases that most modern kids are immunized for: diphtheria, smallpox, chickenpox, rubella, measles… and many succumbed. Shorncliffe has a military graveyard that contains the bodies of men who died on arrival (either as injured soldiers from the front or as those who got sick).

Every year on Canada Day it’s customary for local children to place flowers on the graves at Shorncliffe Military Ceremony of those Canadians who died in Folkestone during the First World War. 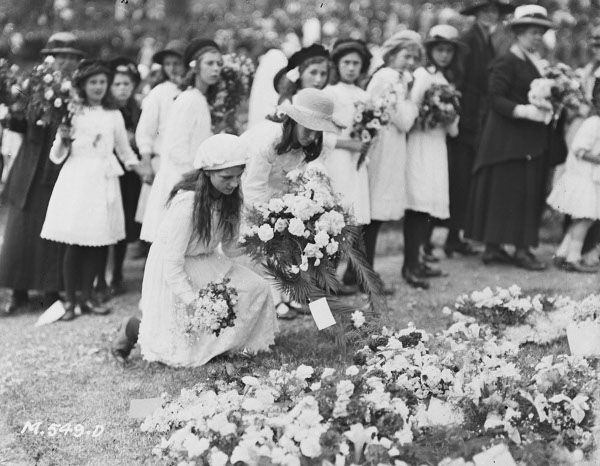 The people of Folkstone have close ties to the Canadians because many soldiers took local brides; and, interactions between the men and townsfolk were difficult to prevent because Canadians were allowed to roam freely in the town. It’s said that Folkstone was once listed as a suburb of Toronto.

After quarantine, it was a waiting game and soldiers spent their time training.

We filled in the time with the old form of drill, & a new variety of physical exercise… Every afternoon we had “pack drill.” That is, we went on long route marches, in heavy marching order. It is at this point that I find I am not strong. All forms of physical exercise I find I am able to do, perhaps better than the average. At shooting too I am fairly good; even bayonet fighting does not find me in the rear of the average. But the heavy manual work of marching with that heavy pack tell on me I find. However I can do it, thank God, and dont complain more that the rest. — Thomas William Johnson, November 25th 1916

This is where Thomas Johnson parted ways with the boys from Mill Village. While the priest was sent immediately to the front lines as part of the “first draft taken from the 209th,” the others were not sent overseas for months.

The Decommissioning of the 209th

Newspapers and locals in Swift Current hailed the men of the 209th as the finest ever seen and ready and fit for service. They excelled in marksmanship, were top of their class, and military leadership had never seen such a fine group of men. After they arrived in England in late 1916, Private W.E. Richard wrote home, boasting that the British camp inspectors had called the men “the best-looking bunch that had come for a long time.”

In actuality, the final inspection lists the battalion ready for service with leadership that was smart but lacking in practice and experience. Rank and file were of good physique but the state of discipline was fair and many had lost “steadiness” while on harvest leave.

For the inspection parade, 121 men were absent without leave (AWOL) from all ranks of the battalion. Privates, gunners, sappers, and drivers had the largest number of men missing: 108; while 8 staff sergeants were missing. An additional 189 were not involved in the parade for a variety of reasons (sick, on duty, AWL, at school, in prison, etc). This means that 26% weren’t involved in the final inspection; 11% were absent without leave.

When they arrived in England, the 209th was almost immediately disbanded with other Battalions as part of a larger restructuring of the overseas units. Originally, it was requested and recommended that the battalion be absorbed into another Saskatchewan Battalion, specifically the 188th (Saskatchewan) Battalion commanded by Lieut-Col. S. J. Donaldson. 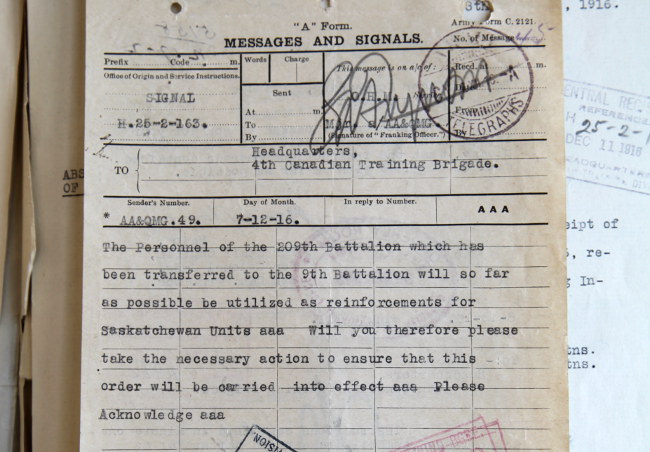 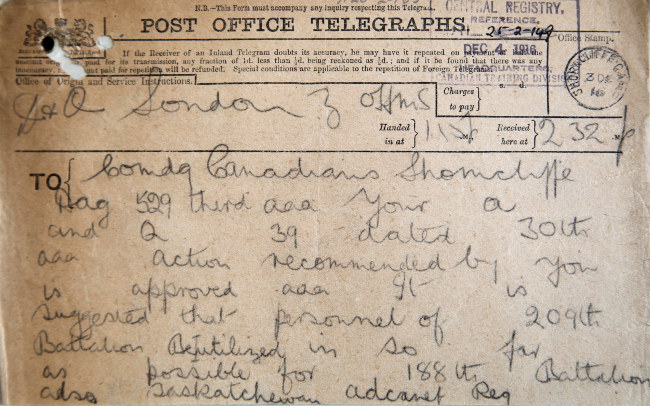 On Dec 5th, 1916 the 209th Battalion was absorbed into the 9th Battalion (The Edmonton Fusiliers). This is not to be confused with the 9th Reserve Battalion (Calgary), which was created in January 1917. 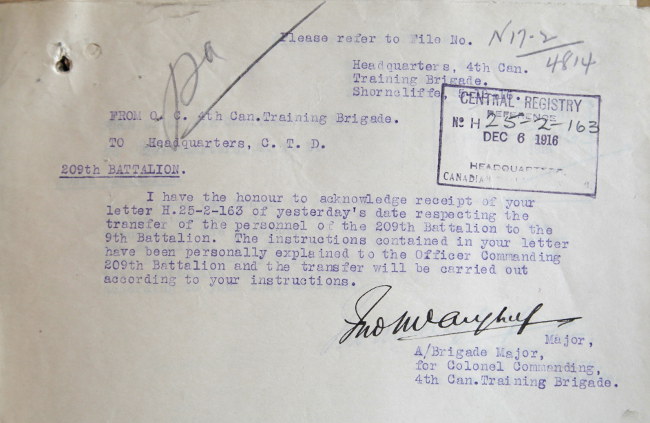 For the Cabri/Mill Village men, they were absorbed by the 9th Battalion “B” Company. This includes Arthur Joy who was previously in the 209th’s “C” Company. 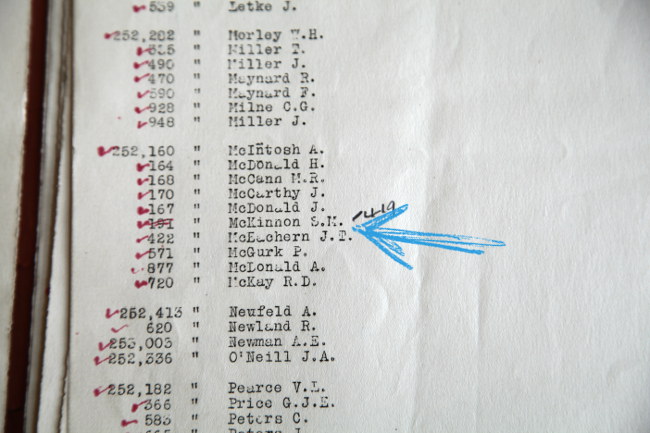 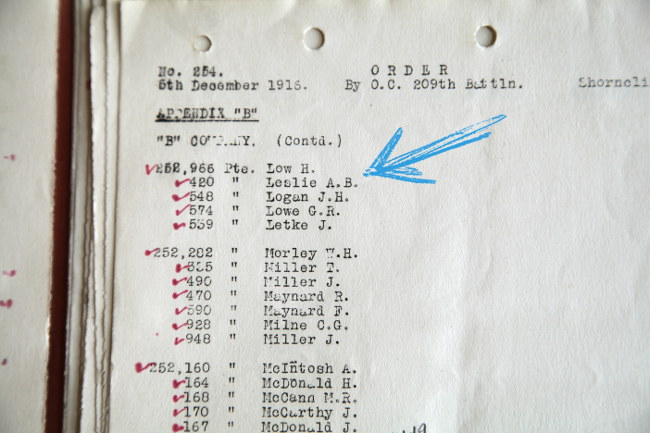 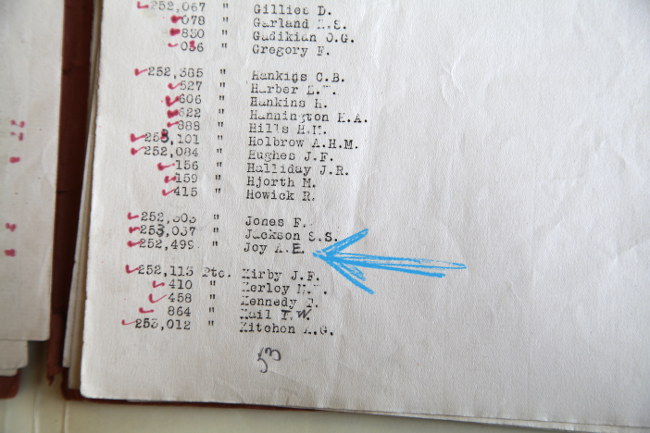 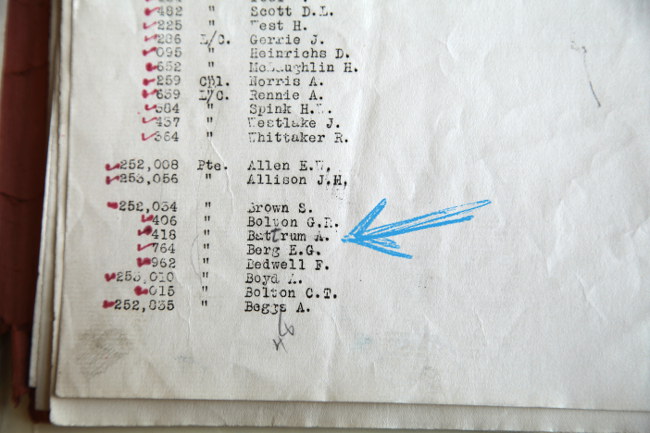 This came as a surprise to many soldiers since the original recruiting pitch was that they would serve together as one unit overseas; they were told that units who formed and trained together would be more efficient than those that didn’t.

This may have been their first inkling that things weren’t as they seemed. Many were held back from France and few fought at Vimy Ridge, instead of filling the ranks after the battle when more men were needed.

Put into historical perspective, there was a tremendous amount of scandal and change in military leadership towards the end of 1916.

Brig.-General Sam Hughes, a huge proponent of citizen-soldiers over career military, was fired from his position as Minister of Defense over numerous controversies; the most noted being the decision to use the Ross Rifle with troops.

Upon arrival with the 209th Battalion in Liverpool, Smyth was immediately called back to Canada to face judicial hearings. There was controversy in how the 209th military stores were handled, how accounts were handled, and also questions about how rejected troops had made it to England.

When the 209th was disbanded, Smyth and two other officers, Capt. Leicester (the Adjutant) and Capt. Bertin (the Quartermaster) was ordered to report immediately to the 4th Brigade for discipline in regard to the handling of the Battalion stores. 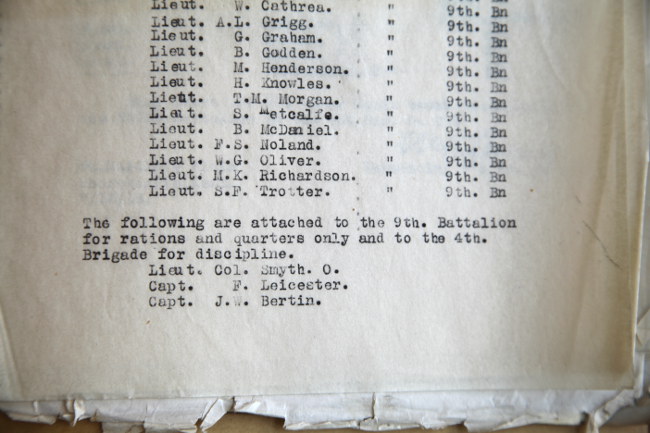 Eventually, after months of litigation, the issue was resolved but only one of these men (Capt. Leicester) would make it back into service.